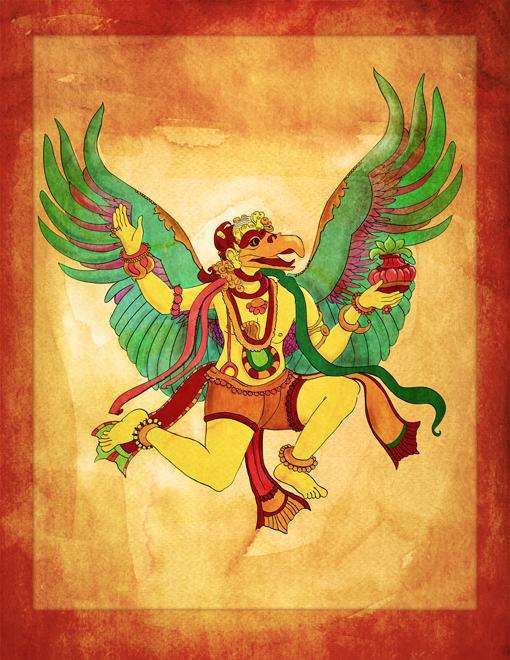 Garuda is Pakshi Raja, king of the birds. Half man and half eagle, he is the color of gold and has great speed, for he is filled with creative energy, the spirit. His father is Kapshya a great sage, and his mother is Vinata. His grandfather is Daksha, a great king.

Garuda is worshipped on Garuda Panchami Day to celebrate Garuda's devotion to his mother, Vinita.  Mothers and sons on this day share the same spirit of love, affection and devotion between each other, and mothers pray for their children's health and future. Mothers bless their children to have the strength and devotion of Garuda to execute devotional activities.

The Vedas mention Syrena as the bird that brings amrita, the nectar from heaven to earth. Like the dove of Christian mythology above Christ's head, the vehicle Garuda on which Vishnu and Rudra ride is like an open seventh chakra, with the earth and body receiving the divine flow of the amrita from heaven. Garuda also symbolizes purification and connects with the throat and fifth chakra, and also connects the bird with the reptilian instinctual nature of the lower chakras.

Here is the story:

How Garuda Brought the Nectar of Heaven to Earth 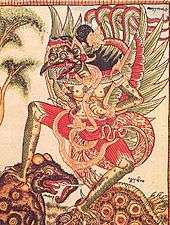 Garuda and his mother were slaves of mother's sister, the snakes. Determined to free himself and his mother, he set out to get the amrita nectar from heaven.

"Garuda!" his mother said, "You must be strong enough to fly to the place of amrita. You need food! Fly to the sea and eat some fishermen. They will satisfy your hunger! But be careful! A Brahmin lives there too. Don't swallow the Brahmin!" Garuda's mother warned.

Garuda went to the sea and ate the fishermen, but he accidentally swallowed the Brahmin too. He felt a great burning in his throat and expelled the Brahmin. Still hungry, his father said, "Go and travel and you will find an elephant dragging a tortoise. The two used to be brothers, but quarreled over property, cursed each other and became their present shapes. Eat them and satisfy your hunger!" 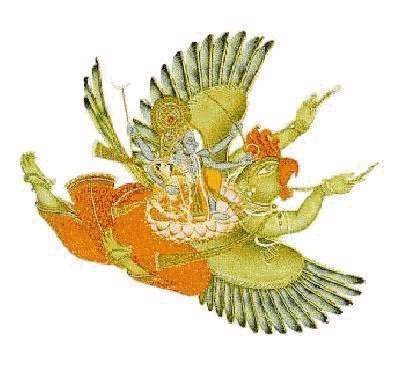 Garuda is the mount of Vishnu

Garuda followed his father's instructions and ate the animals, then flew up to Indra's Kingdom to find the amrita. The gods were alerted to Garuda's presence, but Garuda easily defeated them. He found the amrita, which was guarded by huge flames. Garuda flew to the ocean and swallowed water to extinguish the flames. Then he discovered there was a huge wheel spinning with knives. He shrank himself down and flew threw the wheel unscathed. Then two monsters appeared, but Garuda needed only to flap his wings to blow dust into their eyes, blinding them. Garuda snatched the vessel of amrita with his talons and flew away.

Garuda needed to give the amrita to the snakes in order to free his mother, so he resisted drinking it and obtaining immortality for himself. Vishnu was so impressed with this selfless act that he granted Garuda a boon to become immortal without drinking the amrita.

"Just please don't give the amrita to the snakes!" Vishnu begged Garuda.

Garuda flew down to earth again with the amrita. The snakes released his mother and begged for the amrita.

"You must clean yourselves first!" Garuda ordered.

But the gods were upset with Garuda for stealing the amrita, so Indra came to Earth and fought him. Garuda smashed Indra's thunderbolt, but Indra was able to escape with the vessel of amrita, but not before a few drops leaked out, which the snakes quickly licked up.

The amrita was so powerful, however, that it burned the snakes' tongues. That is why snakes have forked tongues.

Vishnu had been watching everything and was so pleased with Garuda's strength and determination that he made him king of the birds. In return Garuda agreed to be Vishnu's mount, and together they always ride.

Working with the Garuda Story

• Contemplate the image of Garuda during meditation. What qualities does he have that you can contemplate and acquire?

• Tell this story to a friend or to your family at dinner time or at bedtime for some Sleepytime Yoga™.

• Draw a picture of your own version of Garuda.

• Relax and imagine Garuda. Mount him. Where does he take you? What do you do and see, smell, hear, taste, touch? Do you meet anybody or see anything special or out of the ordinary? What do the person say? Do you receive any gifts? What happens? Write down in a journal or tell about your journey with Garuda.

• Look up books and images on birds. Note birds in your daily life.

NAMASTE AND HAVE A MAGICAL, MYTHICAL DAY! 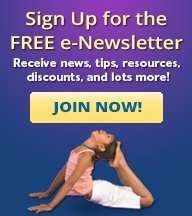