Kids Yoga: Celebrate Diwali with the Story of Lakshmi and Rohini 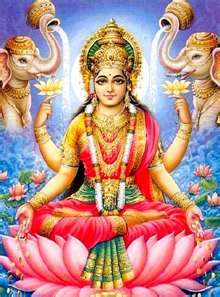 Diwali! The Festival of lights starts Nov. 3, 2013. On this new moon, celebrate Diwali with your family and tell a few stories!

Diwali is one of the most important festivals of India. It’s as big as Christmas, and many communities consider it their new year. Farmers of ancient times always prayed to the Goddess Lakshmi - the goddess of beauty, prosperity, good fortune and the home - after they finished the year’s harvest. They prayed for good crops and more wealth next year. Today Diwali is a festival of joy, prosperity and the triumph of light over dark, good over evil.

Most of all, it’s the festival of lights. The word “diwali” is from the Sanskrit “dipavali” which means “row of lamps.” The root word of diva is light. So the Goddess is light! The tradition calls for divas to be lit in every household to banish the dark and invite good fortune and luck. This action allows you to be like the gods, participate in creation, manifest your desires and identify with the divine! For it’s the light that shines in you brightly through the darkness - it's your inner consciousness and light of knowledge that removes ignorance.

On Diwali, celebrate with family and friends. Dress up in new clothes and jewelry. Share sweets and gifts. Draw some rangoli designs on your driveway to invite the Goddess in. Set off some fireworks. Decorate the house with flowers and light it up with candles. Come evening, make your prayers to the Goddess Lakshmi and Ganesha – the God of wisdom, good luck and the remover of obstacles from your life. Then leave the lights on all night, so that Lakshmi will feel welcome and enter your home!

This is the third year my family is celebrating this ritual! When you participate in ritual using - the re-enactment of the myth using the body and story - you are manifesting your own fortune and luck! The big box stores now all have the tacky Christmas junk for sale, completely out of season and carrying no meaning other than consumption and profit. What meaningless foolishness! What an abomination! Ritual connects you and puts you into accord with the season – the darkening time – and creates meaning and connection to your life. There is nothing to be consumed or purchased but only experienced. Ritual is also an excellent way to bond with family and community and to remember what’s important in life. So celebrate Diwali and enjoy the light, luck and prosperity in your life that the Goddess bestows upon you and your family.

There are many stories associated with Diwali. My favorite has to do with the Goddess Lakshmi and a clever woman named Rohini.

The Story of Lakshmi and Rohini

A long time ago there was a King named Rawal Prithvi Singh. He had conquered many lands and became very prosperous. His city and palace of Jaiselmer were beautiful and marveled by all – a great testament of his success. However, his success made him foolish and narrow-minded.

One day a merchant came to the palace to sell the King some valuable and precious jewels. The King wanted to show off his extreme wealth. He purchased all of the glimmering jewels and diamonds, then ordered them tossed into a ditch.

This foolishness and arrogance infuriated the Goddess Lakshmi. "I'll teach him a lesson," she said. She cast a spell on him and led him into gambling. The King quickly lost everything. Despondent and humiliated, the King left his kingdom in poverty, along with his wife, the beautiful, intelligent and clever Rohini.

The couple ended up staying on the outskirts of the city of Patan to try their luck. Now, Rohini was not only beautiful, intelligent and clever, but a great devotee of Vishnu as well.

“There must be a spell on my husband,” she thought. “I will meditate and fast and perform pujas to break this spell and restore our prosperity.”

One day after her meditation and ritual, she stepped out of her hut and worshipped the tulsi tree. There she saw a dead snake. Just then, a bird with a necklace in its beak swooped down, dropped the necklace and snatched the snake before flying off again.

The necklace belonged to the Queen of Patan, who was bathing in a lake and had left her necklace with her clothing on the shore when the bird took it. After bathing, the Queen was bewildered at what could have happened to her necklace and announced a reward for its return. News swept quickly through the city, and King Rawal - who was in the city at the time - heard the news as well. Upon returning home, he narrated the story to his wife.

“Oh, husband!” Rohini cried. “I am overjoyed at this news! We must go to the palace at once and explain how this necklace came to me!”

Rohini and her husband appeared before the Queen and King of Patan, told the story and returned the necklace. The Queen was overjoyed to have the necklace back and asked Rohini what kind of a reward she would like to have.

"I do not desire money nor land,” Rohini said. “All I wish is that on Diwali night, no house in the whole city, including the palace, shall be lit with lamps. Only my hut will have lamps. Those who want to light lamps may come to my hut and light them around it."

The King and Queen were surprised by this wish, but agreed to grant it.

Diwali soon came, and the King ordered Rohini’s request. The whole Kingdom was dark. That night, The Goddess Lakshmi arrived, expecting to see the lamps lit light her way to their homes. She was surprised that all she found was blackness. Except in the distance, outside the kingdom, at Rohini’s hut – there she saw the light.

Lakshmi approached her hut, but Rohini was at the door with a stick and barred the Goddess from entering.

“Dear Goddess, please lift the spell from my husband. Promise to help get our kingdom back and grant us prosperity once again,” Rohini begged. “Then I will let you in.”

“It is done. I promise.” The Goddess said.

A large smile crept across Rohini’s face. She allowed the goddess to enter her hut, where she spent the entire night and blessed the couple. 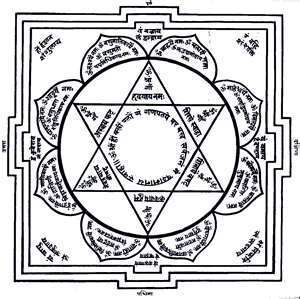 • Light candles and sit in meditation. Gaze at the candle flame, Focus on your breathing. Become the light.
• Place an image of Lakshmi before you and meditate on her image. Invite the beauty, joy and wealth into your life.
• Chant a mantra to Lakshmi - Om Shreem Maha Lakshmiyea Swaha.
• Meditate on the Lakshmi Ganehsa yantra.

Yoga
Contemplate the Goddess Lakshmi as you perform yoga asana. BE the goddess and affirm your beauty and wealth by saying and FEELING with conviction,"I am beautiful. I am prosperous. I am wealthy."

• Sit in lotus pose, padmasana. Place your hands in downward mudra, the mudra of bestowing gifts. Feel the gifts of the goddess flowing through you and into your life. All the wealth, health, happiness you could ever need is available to you now.

Rama and Sita. Hanuman rescuing Sita from the Demon Ravana

Another Version of Rama and Sita with a video as well.

Kali is also worshiped during Diwali.

• Get some chalk and cover your sidewalk with Rangoli patterns.

• Get out the face paint and dress up as one of your favorite characters. BE the goddess Lakshsmi or Rohini!

• Cook up some of your favorite sweets to share.

• Discuss your “inner light.” What qualities do you have that you bring light to others? Is it your joy, cheerful smile, kind words and deeds?

NAMASTE AND HAVE A MAGICAL DIWALI DAY!
SYDNEY